When you take a bus, train, plane, car, or any other means of transport, you invariably know where you want to go. You know your destination before you embark on your journey.

Steve L. is a married father with a young family. He graduated from university five years ago but is not working in the field in which he studied. He claims there are no jobs for what he wants to do, so really what’s the point in trying?

When pressed to explain what he actually does want to do, he says, ‘I don’t know.’ When asked why he studied that particular degree, he says, ‘I thought it’d be good. It’s better to have a degree than not have one.’ He also can’t tell you where he sees himself, or where he would like to be, in five years’ time.

Vickie T., on the other hand, never went to university and probably dropped out of high school. She married young, had kids in her late teens and early twenties, worked multiple jobs in retail and hospitality, then divorced her husband soon after the birth of her third child.

But something happened around the time she turned thirty. She found a cause to which she fully committed herself and it changed her life.

She discovered a passion for helping autistic kids to read and write and to understand and cope with their emotions, which, as any parent of autistic children will tell you, is extremely difficult and challenging. She has even written a series of books to help autistic children and their parents, and she has created online courses and workshops based on those books. Her energy and vitality seem endless.

Where Steve L. appears lost and lacks ambition, Vickie T. is focussed and driven to succeed. In fact, her focus is so laser sharp it seems to cut through any obstacle or challenge. But why is Steve floundering and Vickie flourishing? Why can’t Steve see the woods from the trees, whereas Vickie makes her own path through the forest?

As Arnold Schwarzenegger once told an interviewer:

Create a vision of who you want to be, and then live into that picture as if it were already there. 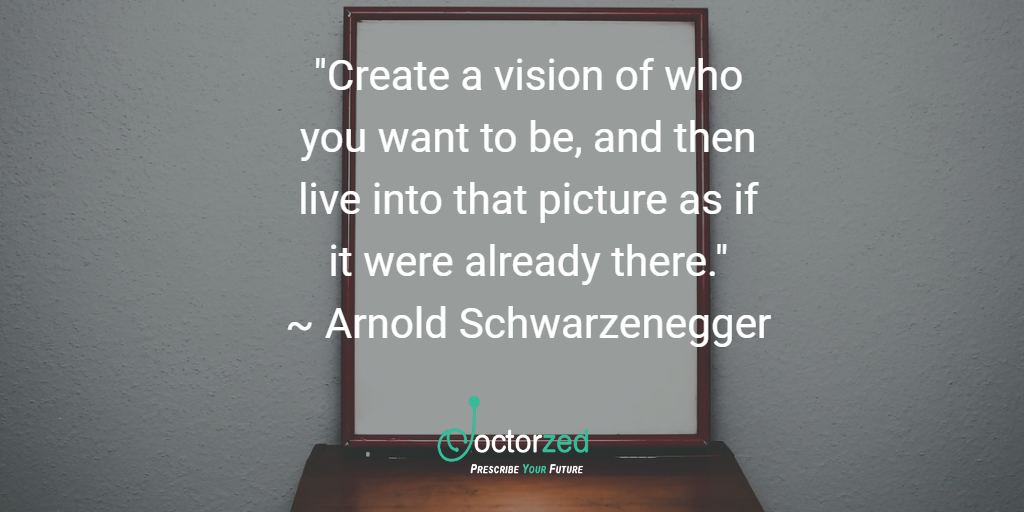 This is the vital point: successful people know where they’re going.

They’re not lost. Madness still happens around them. Difficulties still arise. Yet even in the stress and challenges of everyday living, they have orientated themselves in the direction they want to go. They know who they are and where they want to arrive at.

Their vision lifts the fog of uncertainty, giving them a clear sight ahead.

They have clarity. They have developed the long-sighted, 20/20 vision of Life Leadership and can see beyond the horizon.

Below is a comparison of meaningless and purposeful vision:

Vision and purpose empower Vickie to strive forward, to move in the direction she knows is the right path for her. The lack of vision disempowers Steve. He feels incapable of moving his life forward, seemingly going around and around in circles.

For here is the truth of Steve’s situation:

A lack of purpose makes you blind to your own inner power.

Disappointments and failures visit both Steve and Vickie. But whereas Steve gets bogged down in the futility of life and gives up easily, Vickie keeps moving forward, one step at a time, in the direction of her vision.

This is backed up by research. People without purpose are vulnerable to anxiety, depression, substance abuse, and boredom. People with life purpose, however, fare better.

Like your success and prosperity, these health benefits are a side-effect of your dedication to your life purpose. They are an unintended measure of success in themselves.

If only for that, that’s why you need a Why?

*This article is an excerpt from Dr. Scott Zarcinas’ new book, It’s Up To You: Why Most People Fail to Live the Life They Want and How to Change It.

Find Purpose. Take the First Step to Create the Life You Want Today!

Dr. Scott Zarcinas (aka DoctorZed) is a doctor, author, and transformologist. He helps pro-active people to be more decisive, confident, and effective by developing a growth mindset so that they can maximize their full potential and become the person they are capable of being. DoctorZed gives regular workshops, seminars, presentations, and courses to support those who want to make a positive difference through positive action and live the life they want, the way they want, how they want.

Back to Life Leadership Resources

Want to Be & Do More? Sign Up to Discover the 1 Thing Holding You Back & Transform Your Life!